Guitar Strings: Choosing the Right Strings for Your Guitar

There are many choices when it comes to guitar strings, so every guitarist, regardless of skill level, should have some basic knowledge in order to make the best choice.

There are 2 broad categories of guitar strings:

Determining What Kind of Guitar You Have

So the first thing to do in order to determine the right string choice for your guitar is to determine exactly what type of guitar you have. Here is a short list of guitars and their corresponding strings. The terms we will use to describe the strings are what you would ask for at a music store:

In case you don’t know, an “acoustic electric” guitar is simply an acoustic guitar that is retrofitted with an electronic “pickup” and or microphone system that allows you to plug the guitar into an amplifier in order to increase the volume level of the instrument. Classical guitars can also be retrofitted in this way. The fact that a guitar is retrofitted with a pickup/microphone system usually has no bearing on string choice for that instrument.

Once you have figured out what kind of guitar you have, you will know what kind of strings to ask for. Then you have to choose between various available string “gauges” or thicknesses. Guitar string gauges are usually expressed in fractions of inches. Most string sets contain six strings with standardized gauges that vary from thinnest to thickest. It is common to refer to the gauge of the first string (a.k.a. the “high E string) in order to choose your desired strings, as follows:

Acoustic guitar string gauges are generally described as below:

How to Choose the Right Gauge for You and Your Style

Your choice of string gauge will usually be based on the following considerations:

Lighter gauge strings will generally sound thinner compared to heavier gauges and heavier gauge strings will produce a fuller, broader sound. Since it’s hard to capture the sound of guitar strings in a written word article, it is necessary to experiment and make string choices based on what you like when you hear it. It can take time to properly assess the sounds of different types of strings.

If you have an older acoustic guitar and are concerned about the effect that string tension will have on the wooden structure of the instrument, you might want to use lighter gauge strings to avoid problems that could be caused by heavier strings.

Ultimately, you might choose a certain gauge of strings based on how they feel to play. It’s usually not a bad thing to go with your “gut” feeling or subjective preference when you are simply happy with a certain gauge of guitar strings.

In addition to the factors discussed so far, there are several options, especially with acoustic and electric guitar strings, regarding the materials used in the manufacture of the strings. In the past, guitar strings were made pretty much exclusively out of animal intestines. This became the norm until alternatives were developed over time. Nowadays the most commonly used materials for guitar string production are steel, nickel, copper, zinc, cobalt, phosphorus and various alloys for the broad category we call “steel strings” and nylon, silk and silver plated bronze or copper wire for classical guitar strings. String makers continue to explore the use of different materials to achieve varying results in tone, longevity, durability and cost.

Most “steel string” sets for acoustic guitars consist of 2 plain wire strings for the 1st and 2nd strings and the remaining strings consist of a wire core, usually hexagonal in shape, wrapped with a tight winding of an alloy. Electric sets usually have 1st, 2nd and 3rd strings in plain wire and the remaining strings are wrapped. Classical guitar string sets usually contain 3 pure nylon strings for 1st, 2nd and 3rd strings with the remaining 3 strings made of a silk or nylon filament wrapped with metal alloys.

Round wound, Flat wound or Half wound

Yet another variable when choosing guitar strings is the type of winding available. String makers offer strings that are “flat wound”, “round wound” or “half wound”. Round wound strings retain the original round shape of the wire that is used to wrap the string core. They tend to have a bright sound and are the most popular choice of string. Flat wound strings have a winding that is ground down and polished to a very smooth texture. These strings have a mellow quality that some players like, especially for jazz or some older styles. Half round strings give you the best of both.

When it comes to choosing strings based on the materials they are made of, there are a lot of variables and ultimately it will require lots of experimentation to determine what you like best. If you break a string and want to replace just a single string, most music stores sell them individually. Most sets will cost between 10 and 20 dollars and can last for months when played on moderately.

Hopefully, this information will help you make the right choice for your next set of guitar strings. Don’t forget to talk to your teacher about strings; you can often get valuable information from professional musicians that have learned a lot through their own experimentation with guitar strings. Good luck and happy playing! 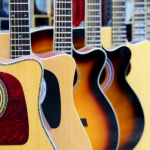 Guitar Setups – Getting the Most Out of Your InstrumentBlog