Mackenzie is a Toronto based music producer, performer, educator, sound designer and label owner whose futuristic, forward-thinking music blends abstract hip-hop, neo-soul, and electronic experimentation. His formal start in electronic music was through the DJ circuit in his hometown North Bay, Ontario. He received his diploma in Digital Music Production at Metalworks Institute and since graduating he’s been thriving in the underground Toronto art scene. After signing with Darker Than Wax earlier in 2018 his debut album “Villanova Junction” released on October 26th, 2018 which gained rotational air play through Giles Peterson’s radio show Worldwide FM and some Spotify editorial playlists. His sound design works with LP24 Audio has won multiple awards via Loopmasters and has been featured in Future Music Magazine, Music Tech, Plugin Boutique, and related first rate communities. 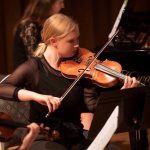