Richard Kahl has played and taught the guitar professionally for over 40 years. Between 1985 & 2008 he played with the well-known Canadian Rolling Stones Tribute Band “The Blushing Brides” performing in over 2000 shows. He has recorded over 15 albums for the “Classic Albums Live” organization and also plays with “The Dylan Tree – A Celebration of the Bob Dylan Song Book”.
Richard teaches both electric and acoustic guitar. He can also teach basic music reading and theory if the student wishes to learn those skills. For this Richard employs the Mel Bay Method series of books. Richard has extensive experience teaching both adults and children (6 and up) and also with children with special needs (ADHD and autism spectrum disorder). Richard also has a B.A. in Psychology.

Richard’s philosophy around teaching is; if the student enjoys the experience and learns what he or she really wants to know (specific songs or solos) then they will be more likely to continue with lessons for the long term. Richard always tries to provide positive reinforcement and never talks down to the student. His mantra is “Set Achievable Goals”. 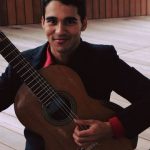