Trevor is well-versed in a variety of styles of music. Growing up, he played in jazz big bands (Littlebirds Big Band, Edmonton) and combos as well as rock bands as a teenager. He has also played in music theatre productions (The Who’s Tommy, Rocky Horror Picture Show, Spring’s Awakening) as a bandleader and guitarist. Along with many styles and types of guitar, he has taught bass, ukulele and percussion in the past.

The guitar has become a passport to Trevor Cooper, travelling with him as he goes. It has taken him from his upbringing in the cold western Canadian Prairies to the heat of southern Spain. He has studied in large urban centers like Toronto (U of T, BMusPerf ‘13) and mountain towns like Salzburg (Mozarteum, MA ‘19). In Spanish Vistas, he realized a life-long dream and made his orchestral debut performing the Concierto de Aranjuez with the Concordia Symphony Orchestra under the direction of Danielle Lisboa.

In 2018 he toured western Canada and Norway with Norwegian guitarist Henry Reitan. He has performed recitals with the Guitar Societies of Edmonton, Calgary and Vancouver and has recently given masterclasses at Mount Royal University, the University of British Columbia, and Concordia University of Edmonton. Trevor is pleased to offer his formidable skills as both a private lesson instructor and bandleader at the Toronto Guitar School.

To Sign Up for Lessons with Trevor please fill out the form below: 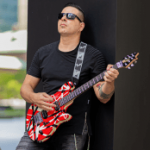