Join us for the Toronto Guitar School’s RockBand & Ensemble Auditions! It’s always FREE to audition! All instruments (including vocalists) and levels are welcome! We have bands for every level of playing ability.

We will be aiming to start up new additional bands this month and to fill a few spots in our existing RockBands, Jazz Band, All-New Funk Band and Metal Band that rehearse weekly.

Members that come to the RockBand auditions will have the opportunity to attend weekly rehearsals starting the week of May 27, 2019. Weekly rehearsals are 1 hour in length and range in cost from $20 – $30 per session depending on the size of the group.

Mint Music and The Toronto Guitar School organize free school concerts 3 times a year open to the public which your group is encouraged to perform at. Other performance opportunities, professional recording and video services also exist for those that are interested.

Julia Henderson is a is a Toronto-born soprano, instrumentalist, composer, producer, and internet artist. She received her Bachelor of Music in Vocal Performance from the University of Western Ontario where she studied with Canadian tenor Torin Chiles and is currently completing her Master’s in Music Technology and Digital Media at the University of Toronto.

As an opera singer, Julia has performed all over the country, appearing as a soprano soloist for Orchestra London, Opera in Concert, Toronto Operetta Theatre, Summer Opera Lyric Theatre, Opera NUOVA, ORIANA Women’s Choir, and the Metropolitan Church Choir. As a digital recording artist, she has fully produced and released 36 tracks, has performed on 25 tracks and has been credited as a performer or arranger on 14 full-length albums.

In addition to performing, composing, and producing, Julia loves teaching and has been doing so for over a decade. Julia has taught voice, piano, guitar, and music theory at a variety of reputable institutions, including the Toronto District School Board. Julia believes that learning through exploration is key and provides a comfortable and nurturing environment in which to explore and have fun through music and song.

Julia’s love of music is complemented by her love of language and lyric diction. She is certified bilingual and continues to study Italian, Russian, and German in her spare time.

Daniel holds a Master’s degree and a Bachelor of Music Degree in classical guitar performance from the University of Ottawa. He also studied with world-renowned pedagogue Bruce Holzman in Tallahassee, Florida for a semester in Fall 2014. Daniel is currently pursuing a Doctor of Musical Arts Degree at the University of Toronto with Dr. Jeffrey McFadden. 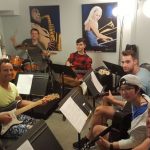 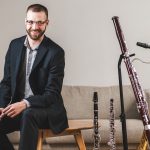